Photo: A Rutgers delegation was invited to Botswana to join President Mokgweetsi Masisi at a government retreat to discuss the university’s new collaboration to help improve Botswana’s health care system.

For most of my career, I have worked to establish HIV/AIDS research, training, and clinical care programs in the U.S. and abroad. Recently, I have expanded my focus to help address the growing epidemic of cancer in sub-Saharan Africa, and the lack of quality cancer treatment and prevention for most on the continent. I believe that health systems in Africa, which have improved over the last two decades to respond to the HIV/AIDS epidemic, can now be strengthened to respond to critical needs in comprehensive cancer care and prevention services.

The following is a summary of my work and its measurable impact on the global response to HIV/AIDS as well as the increasing appreciation of the unmet needs in cancer care treatment and prevention worldwide. 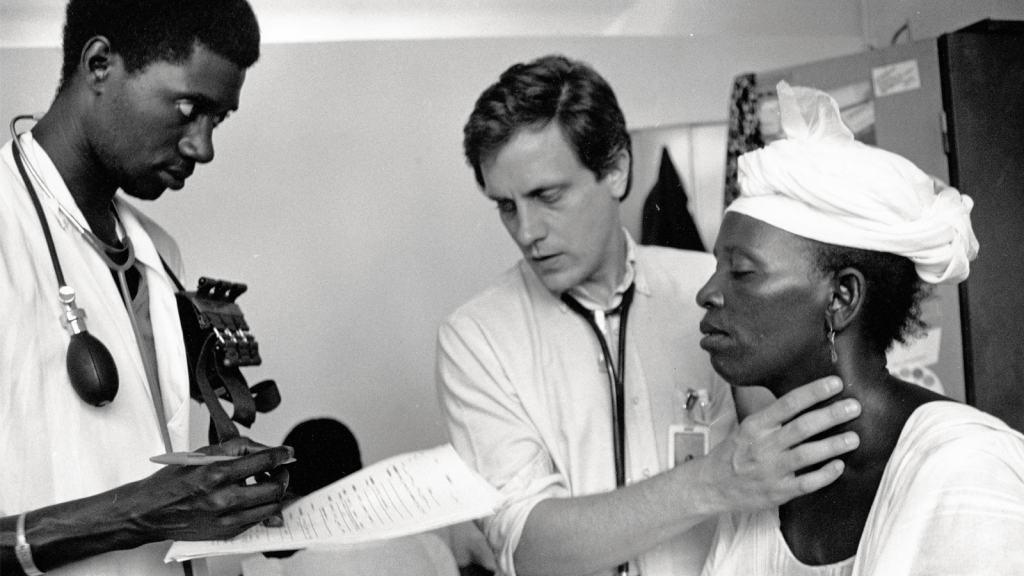 Clinical rotations in Dakar, Senegal consisted of caring for female sex workers and their families infected with HIV-1 and/or HIV-2 AIDS viruses.

In the mid-1980s, as a hematology/oncology fellow at Beth Israel Deaconess Medical Center, I began studying virology and molecular biology as a part of Max Essex’s laboratory group at Harvard University. Our group, along with Senegalese and French collaborators, discovered the first evidence for the existence of a second human retrovirus, HIV-2, with apparent origins in West Africa.

As a clinician, I was able to set up care clinics in Senegal, creating a research cohort comprising hundreds of women sex workers in Dakar who had been infected with this new human retrovirus. In the clinics, we also cared for the women’s children and families. It was then that I discovered that even a small investment of time and money can go a long way when helping those in low-resource settings. 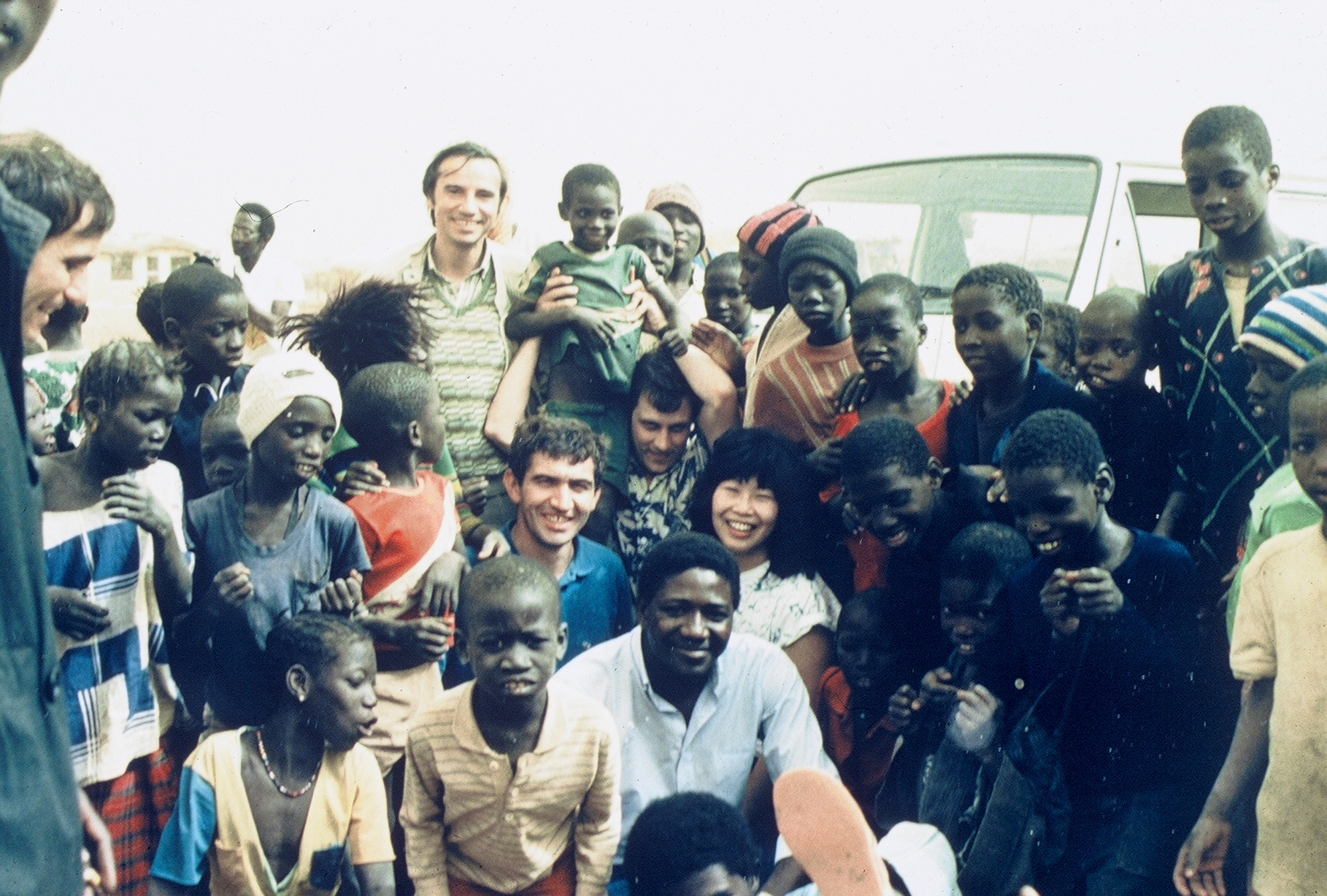 (Near the Senegal/Mauritania border, 1986) The InterUniversity Convention, a collaboration between four universities that assessed HIV/AIDS throughout Senegal. The universities were Harvard in the United States; Universities of Limoges and Tours in France; and Cheikh Anta Diop University in Senegal.

During my time at Harvard, I helped create two partnerships with the government of Botswana: the 1996 Botswana-Harvard Partnership with the Harvard AIDS Initiative, where I was executive director; and the African Comprehensive HIV/AIDS Partnerships, a public-private partnership with the government of Botswana that was launched in 2000 with funding from the Bill and Melinda Gates and Merck foundations. Also in 2000, I founded the Kitso AIDS Training Program, which would become Botswana’s national AIDS training program. Kitso means “knowledge” in the local Setswana language.

I was the principal investigator for “The Tshepo Study,” the first large-scale antiretroviral treatment study in southern Africa, funded by the Bristol-Myers Squibb Foundation’s Secure the Future initiative. My research in the region also included clinical and epidemiological evaluations to help determine how antiretroviral treatment and national treatment programs can best be accomplished in Africa. Since 2000, programs I have created and/or led have trained tens of thousands of health care workers and helped establish national programs on the care, treatment, and prevention of HIV/AIDS in several African countries.

The Enhancing Care Initiative was a five-year initiative managed by the Harvard AIDS Institute and François Xavier Bagnoud Center for Health and Human Rights to enhance the care of people living with HIV and AIDS in countries with scarce resources. The initiative was based on the clinical findings that caring for AIDS patients prolonged their lives, even before the discovery of antiretroviral drugs. I was the creator and director of the initiative.

AIDS Care Teams comprised of local experts were established in Brazil, Puerto Rico, Senegal, South Africa, and Thailand. These teams led their own analysis of HIV/AIDS care priorities for their regions, designed locally appropriate solutions, and generated new evidence and best practices to improve AIDS care and treatment. The initiative was funded through a grant from The Merck Company Foundation, with supplemental grant support for the Puerto Rico team from the U.S. Health Resources and Services Administration.

After President Clinton left office in 2001, he decided that he wanted his post-presidency work to make a measurable impact on global health. As President Clinton’s vision materialized, I was the first volunteer to join his initiative to combat AIDS in Africa. At the time, I was head of the Harvard AIDS Institute and curious as to how Clinton’s intentions reflected a long-term commitment to making a real impact.

In the new Clinton Foundation offices located in Harlem, I helped the chief executive officer, Ira Magaziner bring together a volunteer team of global health experts to help guide the foundation’s initial efforts in Mozambique, Rwanda, South Africa, and Tanzania—four African countries that were experiencing HIV/AIDS infections in horrifying proportions and where President Clinton could utilize his relationship with each country’s president. 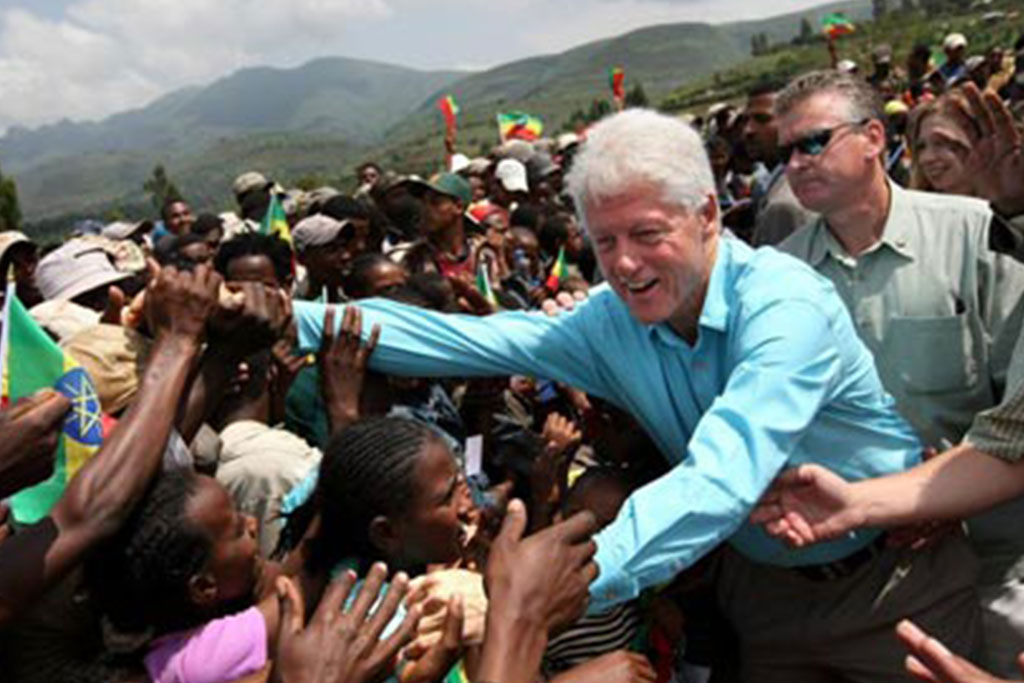 President Bill Clinton greeting a crowd of children in the Highlands of Ethiopia.

In 2002, the Clinton Health Access Initiative, Inc. (CHAI) was founded to assist those living with HIV/AIDS in low- and middle-income countries by dramatically scaling up antiretroviral treatment. Working alongside governments and other partners, CHAI helped lower the costs of treatment and build the in-country systems necessary to provide lifesaving treatment to millions of people.

As Medical Team Leader, I worked with Ed Wood, chief operating officer of CHAI, alongside AIDS and public health experts in the Tanzanian government. Together, we developed the National AIDS Care and Treatment Plan for HIV/AIDS in Tanzania in 2003. The plan, approved by the Parliament of Tanzania, brought to life the foundation’s commitment to bring lifesaving AIDS medicines to Tanzania and work to end the stigma associated with people living with HIV/AIDS.

As a member of the Government of South Africa and Clinton Foundation Joint Task Force, I worked with the team of public and private sector representatives to develop South Africa’s HIV/AIDS National Treatment and Prevention Plan. The plan was a comprehensive, progressive policy and legislative effort. It outlined antiretroviral therapy (ART) protocols; prevention of mother to child transmission (PMTCT) programs; and prevention, treatment, care, and support services for each of South Africa’s nine provinces. The plan was approved by the South African governing cabinet in 2003 and distributed in 2004.

(Moshi, Tanzania) An HIV/AIDS clinical care site for mothers and their children at Mawenzi Regional Hospital, a PEPFAR-Project HEART partner.

Following the 2003 launch of the U.S. President’s Emergency Plan for AIDS Relief (PEPFAR) to combat global HIV/AIDS, the largest commitment by any nation to combat a single disease in history, I was Botswana’s country director for the Botswana-Harvard PEPFAR effort. In addition, while serving as scientific director and vice president for implementation at the Elizabeth Glaser Pediatric AIDS Foundation, I was the principal investigator of Project HEART, another PEPFAR Track 1.0 effort in five African countries. 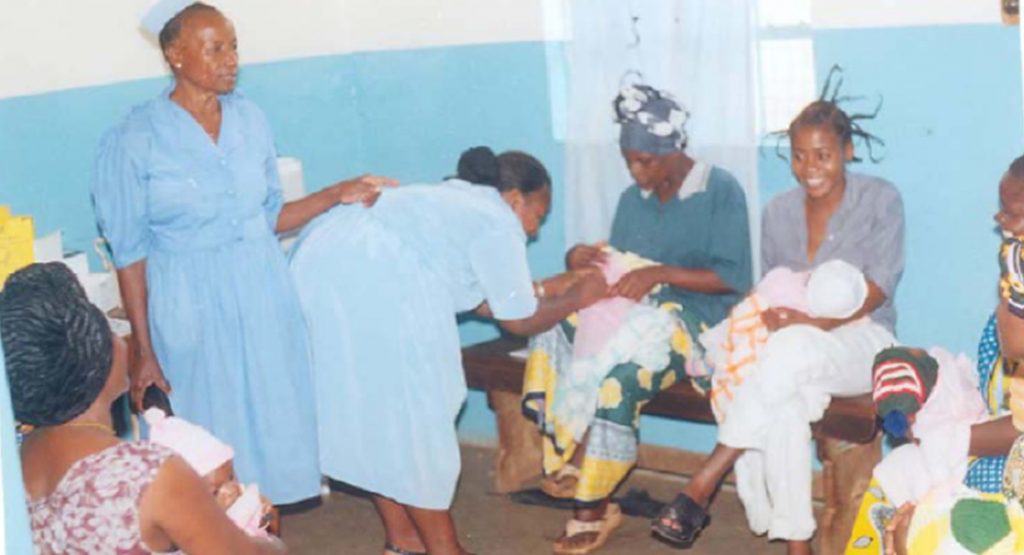 Mothers and their children received life-saving antiretroviral treatment from Project HEART in care clinics like the one at Mawenzi Regional Hospital in Moshi, Tanzania.

Project HEART began in 2004. By 2011, it had placed more than one million people living with HIV into clinical care sites in Cote d’Ivoire, Mozambique, South Africa, Tanzania, and Zambia. More than 565,000 were placed on life-saving antiretroviral treatment through the initiative. 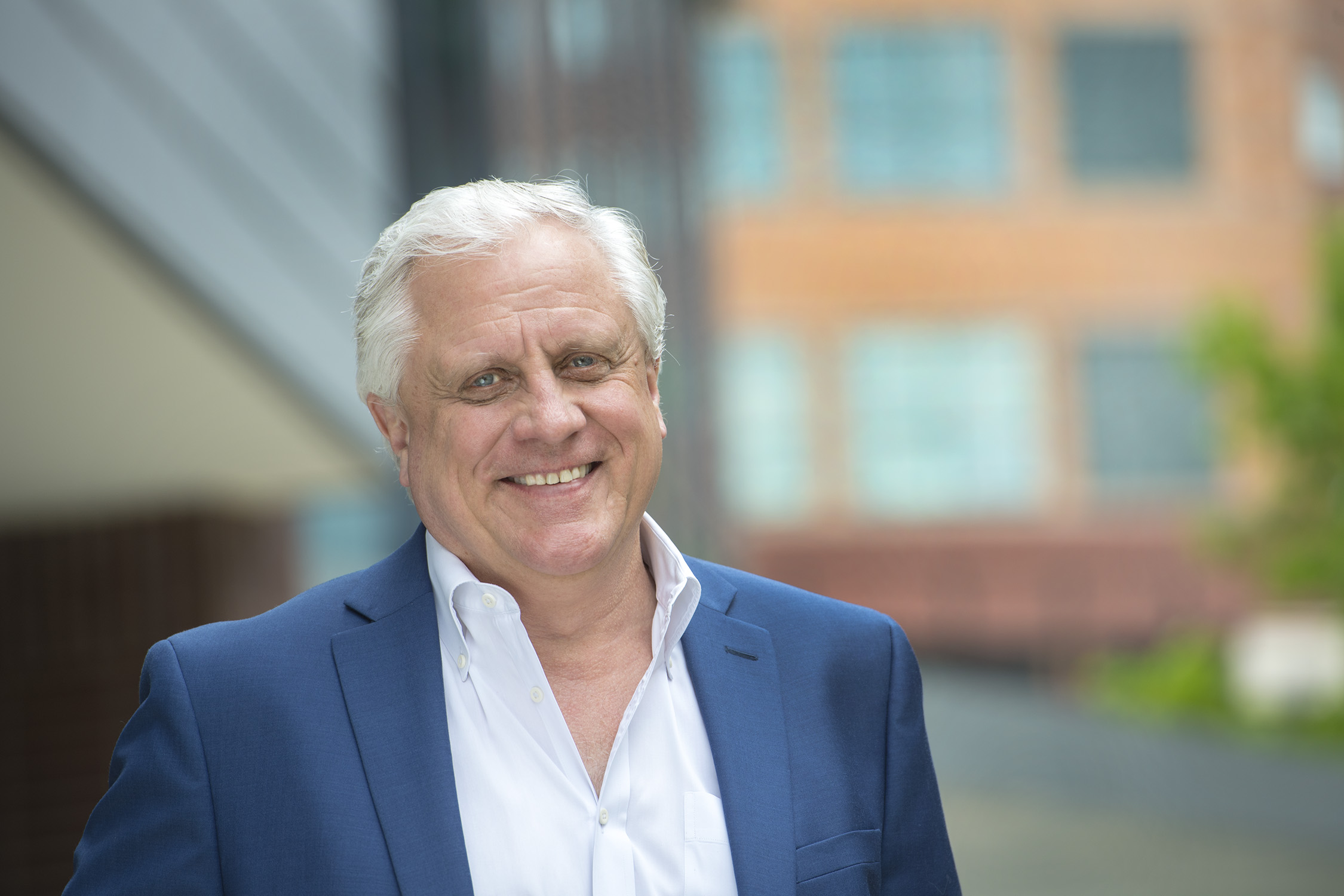 In July 2016, I joined Rutgers, The State University of New Jersey as its inaugural Henry Rutgers Professor of Global Health and director of the Rutgers Global Health Institute. I also hold positions as a professor of medicine at Robert Wood Johnson Medical School and a professor of public health at Rutgers School of Public Health.

Rutgers Global Health Institute was created to support the development of global health education, research, and service programs across the entire university. It serves as a conduit for the recruitment of faculty with interests in global health and a catalyst for impacting global health for faculty and students. Initially, our work has seven focus areas: